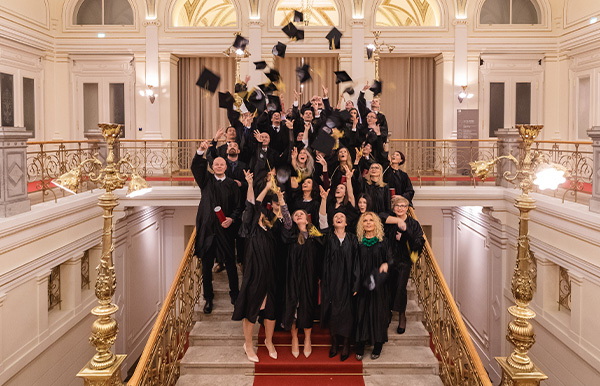 GRADUATION CEREMONY OF THE 7TH GENERATION OF THE LJUBLJANA MBA PROGRAMME

Friday 6 December 2019, was a special day for the 7th Generation of the MBA programme.

It was the day to celebrate the end of their MBA journey when they received their official MBA certificate from the School of Economics and Business, University of Ljubljana.

Their certificate holds a “triple crown accreditation” with EQUIS, AACSB and AMBA accreditations, the most important accreditation bodies in the higher education.

Each year the programme honours the best student and the best professor of the year.

The so called “Award of Excellence” for the best student, according to the academic achievements was given to Julie Choulet and Benjamin Brulc, the award for the best professor, chosen by the generation, was given to Miha Škerlavaj.

The gala event was captured and marked by the traditional cat throwing and welcoming the 7th generation in the Ljubljana MBA Alumni community. The award for “best Alumni” that was chosen among the candidates was given to Rok Goli.

Sincere congrats to all the new graduates!

This website uses cookies to improve your experience while you navigate through the website. Out of these cookies, the cookies that are categorized as necessary are stored on your browser as they are essential for the working of basic functionalities of the website. We also use third-party cookies that help us analyze and understand how you use this website. These cookies will be stored in your browser only with your consent. You also have the option to opt-out of these cookies. But opting out of some of these cookies may have an effect on your browsing experience.
Necessary Always Enabled
Necessary cookies are absolutely essential for the website to function properly. This category only includes cookies that ensures basic functionalities and security features of the website. These cookies do not store any personal information.
Non-necessary
Any cookies that may not be particularly necessary for the website to function and is used specifically to collect user personal data via analytics, ads, other embedded contents are termed as non-necessary cookies. It is mandatory to procure user consent prior to running these cookies on your website.
SAVE & ACCEPT